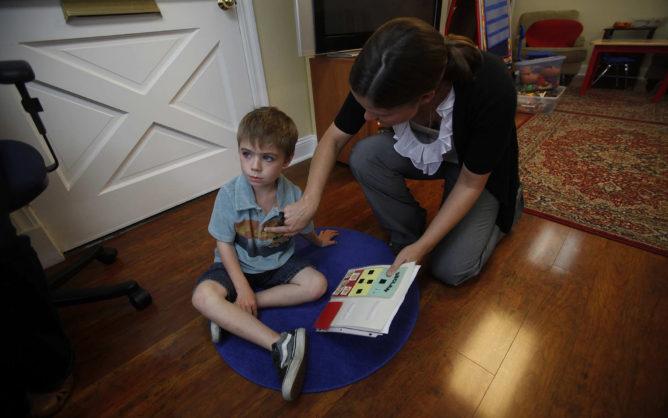 The therapy long considered the gold standard for autism faces an increasingly virulent opposition, mostly from people who experienced it in childhood.

Applied behavior analysis, or ABA therapy, involves a range of interventions based on the theory that the environment influences behavior. The therapy can reduce challenging behaviors and improve the quality of life for people with autism through positive reinforcement, advocates say.

But detractors say the goals of the method are to “normalize” people with autism by camouflaging or suppressing their identity and personality to conform to a neurotypical standard.

The debate is coming to a head this month as the Autism Society hosts three town hall meetings in preparation for a position paper on ABA to be released later this year.

The town halls are designed for people in the autism community to share their experiences with ABA, said Christopher Banks, president and CEO of the organization. “This is an opportunity for all of us to listen and learn from voices across the autism community in a thoughtful, respectful and connected space,” he said.

Insurance coverage for ABA indicates its widespread acceptance as a therapy for autism. As of 2019, all 50 states require insurance plans to cover autism therapy, specifically including ABA in most cases following the advocacy efforts of groups like Autism Speaks.

But many adults with autism consider interventions based on ABA to be unethical and harmful, said Zoe Gross, director of advocacy for the Autistic Self Advocacy Network, which published a report in October opposing ABA.

“There’s not a good evidence base for ABA … there hasn’t been enough study of potential adverse effects,” which can include damaged self-esteem, anxiety, depression and trauma, Gross said.

“The behaviorist approach can be done in a dehumanizing way, the idea that you can influence someone’s behavior without knowing who they are,” she said.

Gross said she received ABA as a child in school, and her classmates would mimic the therapist by saying things like, “My goal for you is to sing less loudly in choir.”

“I think that as a kid I got clearly the message that the way I was was wrong, and I wasn’t supposed to be that way,” said Gross, who considers herself a survivor of ABA.

Advocates for ABA say some of the controversy stems from outdated practices like the use of restraints or withholding food that are now considered unethical. Newer methods are more focused on promoting a child’s self-direction and choice while supporting neurodiversity, said Geraldine Dawson, director of the Duke University Center for Autism and Brain Development and a member of the Autism Society’s ABA Commission, a group of self-advocates, parents and professionals who are working on the position paper.

“ABA and other forms of early intervention have been shown to improve a child’s ability to learn, to communicate, to form relationships, make choices, become independent — all skills associated with better quality of life,” she said. “I do believe that the path forward is one where we need to have autistic individuals and providers and caregivers all working together … by listening to autistic people we can improve what we’ve been doing.”

Therapies involving ABA can help reduce challenging behaviors like aggression, self-injury and irritability, but it is a misconception that the treatment is geared toward suppressing qualities associated with autism, said Alycia Halladay, chief science officer for the Autism Science Foundation.

Read the full article in the Feb. 4, 2022, issue of Disability Scoop here.